Why doesn’t the Green Party cost their platform?

These are both scenarios that are happening right now in a coffee shop somewhere in Nova Scotia:

Scenario 1
Betty – Did you see Steve Murphy the other night? He had that Green Party fella on.
Mahmoud – I saw! Steve really stuck it to him. Imagine proposing a thing like a guaranteed livable income and not having a number on it!
Betty – How can you run for office if you don’t have any numbers worked out?

Scenario 2
Lloyd – There’s another couple million dollars promised by the Liberals. And there come the Tories, racing to match or beat it!
Chen – What’s it for this time?
Lloyd – Does it matter? And that Burrill. He says he’ll put us billions of dollars into debt.
Chen – Why do they bother? We all know they will get into office, express shock at the ‘real state of things’, toss all those numbers out the window and start again.

What’s that saying about ‘darned if you do…”?

The Green Party of Nova Scotia has a vision of how Nova Scotia can be a healthy, prosperous, green province. We know that there will be investment and cuts both required to get there. We equally know the futility of trying to wrestle with those numbers in the short vacuum of time leading to an election. Costs require context.

So, how can the other teams produce these numbers? Well, of course they have paid party staff that have time to play with spreadsheets, so that’s an indisputable factor. But there’s a larger reason – they are not proposing fundamental change. They are playing a shell game. “If we took $10M from here and shifted it to there…” We have all played these games with our personal budgets. Stop buying coffee out so you can save enough for a new video game system. Get rid of cable and get Netflix – cost savings.

The Green Party proposes fundamental changes. Not where are we spending, but how are we spending. Will the rickety, much-modified and sprawling structure of our health and education systems serve us in the future? This is a bigger question than whether we should put $100k into textbooks or educational aides.

We are approaching things with a longer term, holistic vision. That’s one reason.

Another is that we support full cost accounting. Again, this is a fundamental shift and there is no existing information in context to work from. So, when the Liberal party commits a million dollars to twinning highways, that’s simple cost accounting. Materials + labour = that amount. Full cost considers the environmental impact, the cost of extraction, the full life cost.

Plus, we consider the other items that could be accomplished with that money, and whether there is a lower impact way to achieve the desired outcome (safer roads).

All of which is not to say we COULDN’T produce numbers, just that it would be disingenuous to present them as a guarantee. And that matters to us.

Unfortunately, we have far more pollsters and predictors contributing to the public discourse than we have people dissecting the accuracy of the numbers, and what they ultimately might mean. Time will tell how accurate or useful they turn out to be. What they will not be is anything new, and that is disappointing. 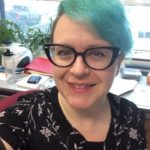 Charlene Boyce is the Communications Chair for the Green Party of Nova Scotia, and the 2017 candidate for Fairview-Clayton Park. Read more about Charlene here.