After registering, you will receive a confirmation email containing information about joining the meeting.

Or if you are in the neighbourhood, we are at the Mahone Bay Centre, 45 School Street. Mahone Bay 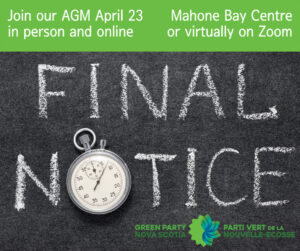 This message is your final notice of the AGM
Co-ordinates: The AGM will be held on April 23 and will be a hybrid event, with opportunity to attend in person or online through Zoom
Location: Mahone Bay Centre, 45 School St, Mahone Bay, 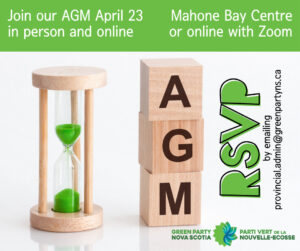 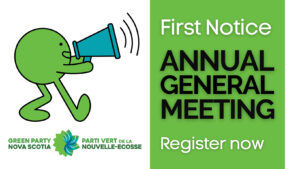 “Nova Scotia Power’s recent rate proposal is an insult to all Nova Scotians who care about Climate Change,” says Nova Scotia Green Party Leader, Anthony Edmonds. “The fee for customers with net-metered solar installations” he adds, “is nothing more than a tax on people who are investing in our future. It has to be stopped.”

Nova Scotia Power (NSP), a subsidiary of Emera Inc., announced a proposal last week to charge homeowners who have net-metered solar installations a fee of $8/kW per month. The President and CEO of NSP, Peter Gregg, says that homeowners who produce electricity using solar panels need to start paying more for the use of NSP infrastructure.

Nova Scotia’s Green Party Environment Advocate, Brie Dukeshire, argues that any attempt to frame this solar tax as fair to consumers is misleading. She argues, “Nova Scotians have been paying for the infrastructure to produce and transmit energy through their power bills ever since NSP was privatized. This tax simply serves to pad the pockets of company shareholders at the expense of Nova Scotians.”

Edmonds points out that the GPNS applauded the government for introducing legislation committing the province to achieving net-zero emissions by 2050. He adds, “However, NSP’s current efforts to reduce greenhouse gas emissions do not put us on a path to meet our climate goals, including renewable energy targets. With this solar tax, NSP is stamping out any competition from ordinary Nova Scotians, making sure that no renewables will ever get built in Nova Scotia unless Emera can reap a return on investment.”

The proposed solar tax highlights the many problems with relying on a privatized monopoly for our energy generation. Unlike most businesses, Nova Scotia Power does not face the pressures applied by market competition. The company is guaranteed by law a 9.2% return on investment (ROI) each year. “We are in a climate crisis,” says Dukeshire, “we need organizations and people to be engaged at all levels. We can’t allow privatized utility monopolies like NSP, which are beholden to shareholders and profit, to hinder the rapid scaling-up of clean energy generation necessary to meet the province’s climate targets. If they won’t do it on their own, then we will need legislation to require them to do so.”

The Green Party of Nova Scotia calls on the Utility and Review Board to reject the solar tax proposal, or if the UARB does not stand up for Nova Scotians, then it calls for MLAs to update the Electricity Act. The Electricity Act should prevent penalizing any activity that helps Nova Scotia reach its emissions target, consistent with the spirit of the 2010 amendment that implemented the enhanced net-metering program.

“Nova Scotians know an end run when they see one,” says Edmonds. “We can’t allow NSP to slip through this surcharge loophole. If NSP refuses to work for the good of the people of this province, then it may be time to reconsider the possible conflict of interest arising from the current arrangement, where generation and distribution are both owned by the same for-profit monopoly.”

For additional information or to arrange an interview, contact: