Greens across Nova Scotia are presenting two upcoming events that are open to all!  To join the events, please click on the event links under the images.

The Green Economy hosted by the Fundy Shore Region 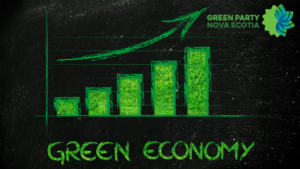 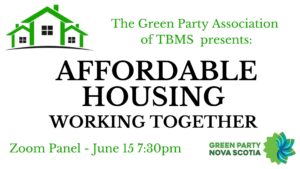 This event is being rescheduled.  You can use the link to register and be notified directly when the new date is set. 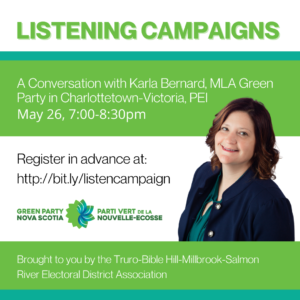 Welcome to Delphine and Lily our new Policy Convenors!  See all the latest updates in our most recent newsletter by clicking HERE

Thank you to everyone who came out (virtually) in March for the first Maritime Green Summit.  Below you can find the video replays (English) and French audio-only files.  You can also click on the link to read the full transcript, including the break-out room reports: Maritime Green Summit TRANSCRIPT

(Halifax)Dr. Thomas Trappenberg has announced that he is stepping down as leader of the Green Party of Nova Scotia. He has been leader of the GPNS since 2016 and has run several times as a Green Party candidate both provincially and federally since 2006.

Dr. Trappenberg took on the leadership of GPNS, with Deputy Leader Jessica Alexander at a time when the party was at risk of dissolving. Since that time the party has stabilized and grown significantly. “I feel the party now has a firm foundation. I am proud of the successes we have had over the past five years. We have been a strong voice for the environment, standing up for our forests, our oceans and social justice,” he said.

“We are a grassroots party and our members have indicated that they are ready for new leadership,” he added. As part of the Annual General Meeting of the GPNS held on April 25, the majority of members voted in favour of holding a leadership contest.

This recommendation will now go to the GPNS Executive for decisions on next steps. Deputy Leader, Jessica Alexander, will be acting Interim Leader until that time.

The Past President of the GPNS, Ashley Morton said, “The Green Party of Nova Scotia thanks Dr. Trappenberg for his leadership and thousands of hours of labour for the party. He is unquestionably leaving it in better shape upon his departure than when he took on the leadership role.”