The Green Party of Nova Scotia has a new leader. Thomas Trappenberg, voted in on Saturday at the party’s annual convention and general meeting at Dalhousie University, says the time was right for him and for the party.

“We needed someone,” he said Sunday. “And we are also at the time that people (are) really (ready to) wake up and see that we need to do something.” Read More…

“Margaret Miller walking out of the climate talks shows that Nova Scotia Liberals are really climate change deniers,” said Thomas Trappenberg, Leader of the Green Party of Nova Scotia. “More than that, they even deny Nova Scotians a modern economy. Polluting our air for free and stating that clean energy is economically not viable is an affront and makes me wonder who is paying their bills.”

“By opting out of the dialogue meeting Minister Miller and her government have betrayed the young of Nova Scotia who will bare the brunt of climate change inaction,” said Richard Zurawski, the Green Party of Canada’s Climate Change Critic. “The science is clear. We must act now. Time has run out.”

“Ever since Premier McNeil stated that burning Cape Breton coal would be good for the environment because it is ‘local’, I have wondered ‎about the provincial Liberals grasp of the fundamentals of climate science,” said Elizabeth May, Leader of the Green Party of Canada (MP, Saanich-Gulf Islands). “The federal proposal will return any pollution fees back to Nova Scotia. The provincial government could direct those funds to assist low income Nova Scotians to save fuel costs by better insulating homes, or any number of a range of programmes. Walking out is not constructive.”

Nova Scotia is so far refusing to participate in a carbon pricing plan. On Monday, the Trudeau government announced the national plan, setting the carbon price at $10 per tonne in 2018 and increasing to $50 per tonne by 2022. 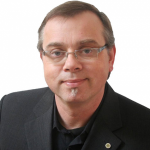 Computer scientist Thomas Trappenberg will run for Nova Scotia’s Green Party in the Halifax Needham byelection, after a tumultuous and grief-stricken summer that nearly saw the end of the province’s political movement.

“We had a close call. You know, a lot of our members, they don’t really want to be politicians. They are really engaged, but stepping forward and taking common roles are not usually their thing,” he said Tuesday on Information Morning. Read more…