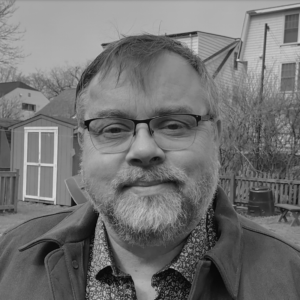 Thomas Trappenberg earned a PhD in physics from Aachen University in Germany before settling in Nova Scotia in 1992 where he is now a professor of computer science at Dalhousie University with specialization in artificial intelligence and computational neuroscience.

Thomas has co-founded several companies including ReelData that applies AI in aquaculture and Nexus Robotics that builds a weeding robot which won a major robotic farming competition in 2018. He is currently part of a major effort to build detailed habitat maps of the north Atlantic Ocean with the aim to record the effects of climate change in the oceans.

Climate change has been a major concern of his since his father, a meteorologist, told him about the effects of temperature shifts over 40 years ago. Thomas ran as Green Party candidate in numerous provincial and federal elections since 2006, and he has been leading the Green Party of Nova Scotia for the last 5 years.

Besides scientific papers, Thomas authored numerous books, including two textbooks on computational neuroscience and machine learning, and a recent book on Green ideas called “Green means Go: Making Nova Scotia a Have Province” that was co-authored by the current interim leader of GPNS, Jessica Alexander.