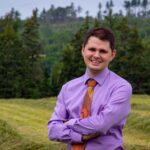 Simon Greenough was raised on his family’s dairy farm in Greenfield. In 2017, he graduated from the University of New Brunswick in Fredericton with a BSc in Biology. Simon has spent most of his time since graduating working in the hospitality and service industry, and has previously worked in the community as an energy efficient product installer.

Currently he works as a lab technician at an environmental services company during the day, and as a bartender at a local brewery in the evenings. Growing up, Simon was heavily involved in the local 4-H program. Through 4-H, he had the opportunity to represent Nova Scotia at the Canadian Young Speakers for Agriculture competition, as well as the first ever Youth Agriculture Summit.

Simon believes in the importance of youth representation in government at all levels – particularly when it comes to making decisions to confront climate change and our housing crisis. He recognizes that a large reason why people – especially young people – don’t get involved or stay informed about politics is because they lack the time, money or energy to do so. That’s why Simon supports a guaranteed livable income, to lift people out of poverty and allow them the resources they need to get involved in their communities.

When he has free time, Simon enjoys playing disc golf and video games, baking sweets, and spending quality time with his partner, Makayla.