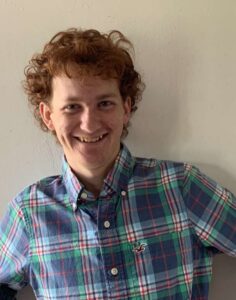 Robert “Robbie” Hussey is a recent high school graduate from Sydney Academy and graduated with Highest Honours. They plan on attending Cape Breton University in the fall studying for a Bachelor of Arts and Science in Environment. They also plan to learn French during or after university to reconnect with his partial Acadian ancestry.

He is Queer and goes by any pronouns, so LGBTQ2SIA+ issues are very important to him and wants to see those issues be more mainstream. There’s also a substantial African Nova Scotian population in the Pier and their concerns need to be heard. A strong believer in Land Back to the Mi’kmaq and other Indigenous groups as well. The climate crisis however is his priority when it comes to politics. It should be at the core values of every political party and they don’t understand why it isn’t. Biodiversity needs to be protected, the fossil fuel industry needs to end, and Indigenous voices need to be prioritized. It’s life or death for our world.

They like to spend their free-time playing Dungeons and Dragons every Wednesday and Thursday. As well as spend time with friends and family. He also has two pet snakes Copper, a corn snake, and Argentum, a blue eyed leucistic ball python.