Ron G. Parker is the Green Party of NS candidate for the upcoming Sept 3rd by-election in the Northside-Westmount riding.

Ron is a self-employed IT professional working in the health and social services sectors.  He is a member of the Executive Council of the Green Party of Nova Scotia and a member of the Green Party of Canada.  The Green Party is “in the family” as his father was part of the team that saw the leader of the PEI Green Party, Peter Bevan-Baker, elected to the first Green seat in the PEI Legislature.  Ron had an opportunity to get to know Peter, as he and his Dad accompanied him to Green town-hall meetings on PEI leading up to the April 2019 Election, where Islanders elected 8 Green Party of PEI candidates to the legislature, forming the official opposition. 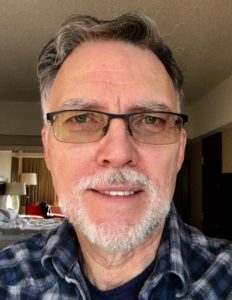 Ron was born on Prince Edward Island but has spent most of his life living and working in Nova Scotia.  He has a history in the CBRM area and particularly in the Northside-Westmount riding.  He began school in primary at Mt. Carmel school in New Waterford.  Later the family moved to Sydney Mines where he attended Grade 4, after which the family moved back to PEI.

As an adult, he returned to live in Sydney in the early 1980’s, working as a school photographer covering all of Cape Breton Island, along with Guysborough and Antigonish counties.  During that time, he travelled to almost every single community in Cape Breton, at least twice each year.  This, of course, included Westmount, North Sydney, Sydney Mines and Florence. While working from Sydney, he took a night course in computer programming at Cape Breton University (then UCCB), and that experience launched him into his current career. This is something he is very grateful to CBU for.

In the Sept 3rd by-election, Ron is offering the voters of Northside-Westmount a “strategic voting alternative” to the traditional parties.

The Green Party believes in sound fiscal management, fostering small business, and strengthening our economy while ensuring that it is sustainable. At the same time we believe that government must provide needed social services while protecting our environment and the rights of women, minorities, and disadvantaged people. We are not entirely right wing nor entirely on the left.

We absolutely believe that economic sustainability and livable communities requires consideration for the ecology and environment we are part of.  The people of Northside-Westmount understand this, having lived with the consequences of sacrificing their health and quality of life to a largely coal-based economy that has been in decline for a long while.

The area has not really recovered from mine closures and the departure of the steel foundry.  There has not been a successful transition to a robust economic base as is documented in the August 9th CBRM Viability Study.  The sustainability of all the communities in CBRM is uncertain.  The Green Party is known as an environmental party, and believes that we need to move away from fossil-fuel based economies as quickly as possible.  At the same time, the Green Party recognizes the huge impact this has on coal based communities and believes the provincial and federal governments have a special responsibility to support this transition.

The Green Party nationally has endorsed the 10 recommendations arising from the “Federal Task Force on a Just Transition for Canadian Coal Power Workers and Communities”.  Many of these recommendations would specifically address the challenges for Northside-Westmount and all of CBRM in achieving a sustainable and economy and quality of life.  Perhaps it is time that CBRM be seen as the leading provider of “green” energy (solar, wind, hydro, and tidal), and a manufacturing and research centre for green energy technologies.

Access to appropriate and effective health and care services continue to be a primary concern for the riding.  However traditional acute-care centered model are costly and are based on the patient coming to health care rather than delivering care where the patient lives.  This needs to change.  The Green Party also believes it is time for consolidation of social and other “poverty industry programs” into a Guaranteed Livable Income (GLI) for all.  The use of a GLI could eliminate poverty, the primary social determinant of physical and mental illness, and allow social services to concentrate on other compelling problems.

The world around us is changing rapidly, and the days of small incremental changes are over.  We need to act decisively now. The Green party is the only one that has taken the issues of economic and ecological sustainability seriously and made a meaningful plan in “Vision Green”.

Ron hopes the voters in Northside-Westmount will see solutions for their concerns for themselves and their community in the Green Vision and platform.  He is running as a candidate so that like-minded citizens know there is a place they can place their vote on Sept 3rd that will matter strategically going forward to the next provincial election, and into the future.