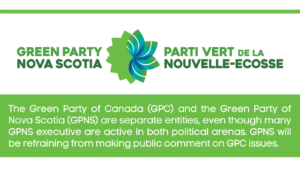 In discussions with other greens, I have collected thoughts on the state of our society and why I think it is time for a new era of politics.
This collection of essays argues why I think politics needs revitalization, and how I think this can be done.

These are not the official policies of the Green Party of Nova Scotia, but this is meant to show my deeper thinking about the problems we face and the opportunities I see.

The Green Party of Nova Scotia is pleased to announce that our Leadership Election will be held on August 14th, 2021.

The next Leader and Deputy Leader of the party will be elected together, as a single, two-person candidacy (known as a “ticket”).

The deadline to submit applications to be Leader and Deputy Leader is July 8th 2021.  2021 GPNS Leadership Election Rules

The election will be held by an all-member preferential ballot. The event will be held in-person, if at all possible, or as an online meeting.

When you can vote:

All members in good standing two weeks before the election. (Exceptions apply to recently lapsed members.)

Full rules and timelines will be published very soon and made available on our website greenpartyns.ca, but we wanted to let you know about the most important facts and dates associated with the race.

A leadership contest is an opportunity for our party to demonstrate participatory, grassroots democracy. Please consider getting involved and encourage others to do the same. Recruit new members, encourage people to put their name on the ballot for Leader or Deputy Leader or do so yourself. Nova Scotia needs Green voices to be heard. Now is the time to be bold.

GPNS Calls for a Halt to the Sale of Owls Head

The Green Party of Nova Scotia is calling on the Rankin Government to stop the sale of Owl’s Head Park Reserve.

the hundreds of letters addressed to them, the thousands of petitioners and the multitude of red signs across the province, calling for the cancellation of the proposed sale of Owls Head.” said Interim GPNS Leader, Jessica Alexander.

“In 2013,” she pointed out, “the Assembly of Nova Scotia Mi’kmaq Chiefs, citizens, environmental organizations and industry representatives were all consulted prior to the release of the Provincial Government’s ‘Our Parks and Protected Areas Plan’. Owls Head was listed as site #694 in that plan.”

“We agree with lawyer Jamie Simpson, who explained in his arguments to the court on behalf of his clients Bob Bancroft and the Eastern Shore Forest Watch Association ‘The heart of this issue is really the secret removal of a park’s [pending] protected status.’ If the province has nothing to hide then it should consult the public before selling off this prime property, or any crown land, which is owned by all Nova Scotians.

Alexander says this will be an issue that all Green Party candidates will fight for in the upcoming provincial election. “We support new jobs, and economic development for the communities surrounding Owls Head, but we want them to be locally generated jobs, year-round jobs. Not jobs that alter the natural habitat of the rare and at-risk species in the area and threaten the environment for those who live there,” she concluded. It’s time to continue to build Nova Scotia’s reputation as a leader in ecotourism, a sector that is expected to grow to $103.8 billion (US) in the next 6 years.(1)

Ian Rankin has a chance to correct as Premier the mistake that was made when he was Minister responsible for Owl’s Head Park and the decision was made to sell the land. The Green Party of Nova Scotia calls on him to respect the peace and friendship treaties with the Mi’kmaq nation and the right and reasonable expectation of the electorate to be consulted about changing a plan they had helped craft, back in 2013.