Today, Tuesday August 17th, is the day. Please vote using the information found on your voter card. Polls open at 8am and close at 8pm. Having trouble voting, please get in touch with Elections Nova Scotia here: https://electionsnovascotia.ca/how-can-i-vote 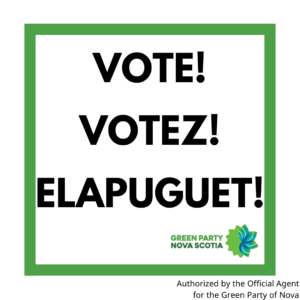 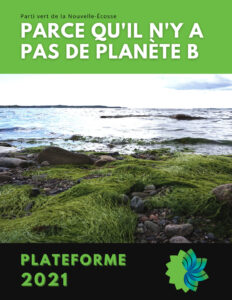 Did you know that of our 43 candidats, there are at least 14 who speak French including many who consider themselves at least fluently bilingual. We would especially like to underline the contribution of Ivan Drouin in Colchester North and Claire McDonald who is running in the riding of Clare.

Peter Bevan-Baker, Leader of the Official Opposition of Prince Edward Island, will be in Truro on Saturday, August 7, to campaign with Shaun Trainor, Candidate in Truro-Bible Hill-Millbrook-Salmon River, and Ivan Drouin, Candidate in Colchester North. He and several Green MLA’s will join them, along with Jessica Alexander, Leader of the Green Party of Nova Scotia for this election, in a variety of campaign activities on Saturday afternoon, starting with a visit to the Truro Farmers’ Market at noon.

Peter Bevan-Baker was elected in May 2015 as the first Green MLA for Prince Edward Island. On  April 23, 2019, Peter was re-elected in the newly established district of New Haven-Rocky Point, and  with a caucus of eight, he formed the first Green Official Opposition in Canada.

Shaun Trainor is a native of Salmon River and recently returned after studying in Sweden and the United Kingdom, completing degrees in Human Rights, Climate Justice and Psychology. Shaun volunteers with the Truro Homeless Outreach Society and is a member of the board of the Nova Scotia Environmental Network.

Ivan Drouin has over 30 years’ experience in healthcare, as a psychologist, former addictions and mental health services director, and mindfulness instructor. He is a founding member of the Truro Francophone Community Centre and was a volunteer member of the board of the Canadian Mental Health Association.

The Green Party of Nova Scotia will release its provincial platform tonight, July 27 at 7pm.

“We’re very excited to launch our platform tonight. It is a comprehensive platform that touches on many of the issues that are important to Nova Scotians. I’m very proud to present our team of candidates who will be rolling out the platform” said Matthew Piggott, Provincial Campaign Manager.

The platform will be available at www.greenpartyns.ca shortly before the event.

The Green party has nominated candidates in 43 out of 55 provincial electoral districts for the August 2021 election.

The Green Party of Nova Scotia officially launched our campaign on Thursday, July 22 live on Facebook.  Leader, Jessica Alexander and Deputy Leader, Jenn Kang shared an overview of what to expect from the GPNS in this election.  You can watch the replay on our Facebook page here