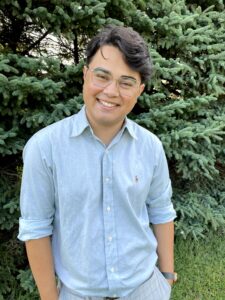 Kai Trappenberg is recent graduate from Dalhousie University, where he earned an honours degree in neuroscience and was actively involved in research and on-campus political advocacy.

In his second year, he founded the Dalhousie Greens Society, which promoted environmentalism, social justice and local politics among the student body. He served as president of the society for the remaining three years of his degree while also serving as a member of Health Association of Nova Scotia’s youth shadow board, where he provided a youth perspective on issues such as the mental health crisis that is currently facing healthcare workers in Nova Scotia.

Kai was born in Hakodate, Japan and lived in Germany and England before settling with his family in Nova Scotia. His international upbringing gives him a unique multicultural perspective. As a scientist, many of the Green Party’s environmental values align with Kai’s personal perspective.

He is an advocate for climate action and believes that Nova Scotia has the potential to become a world leader in renewable energy and climate saving policies. As well, he strongly supports the idea to implement a guaranteed livable income. GLI will allow Nova Scotians the financial security needed to support their families, and meet basic needs, while allowing them to follow their passions, which will increase both the GDP and GNH (Gross National Happiness) within the province. He believes the Green Party is the Party of the 21st century, with modern ideas, and strong youth involvement.

Kai showed his support for these values in the 2017 provincial election when he ran as the candidate at only 18 years old. In his free time, Kai enjoys spending plenty of time outdoors being overwhelmed by mosquitoes while camping and hiking, as well as playing soccer and practicing karate, in which he competed internationally.

Time to be brave, Go Green!