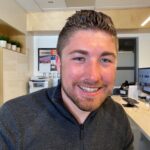 Corey Myers is a hard-working Early Childhood Educator. He has been in the field for over three years, working with many different age groups and also working as an Inclusion Coordinator. During the third wave of the Covid-19 pandemic, Corey became an active leader advocating for the rights and safety of ECEs across Nova Scotia.

Corey values our democracy and believes in the importance of diverse and progressive communities. Corey believes in the need for a greener future and a government committed to transparent policy making and implementation.

In his free time Corey enjoys reading, running, gardening, and has recently taken up guitar. Corey knows the importance of education and is always looking for ways to learn more about the issues and concerns affecting his community.

The Green Party of Nova Scotia is excited to have Corey Myers as our candidate in the riding of Eastern Passage.