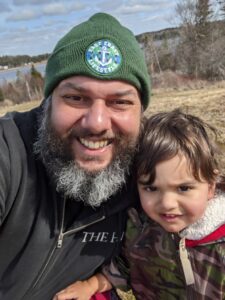 Corey Clamp grew up in the Acadian village of Sluice Point.  Raised by a single-mother, with the support of many extended family, Corey graduated from École Ste-Anne du Ruisseau, following which he completed a BA in political science and international development studies at Dalhousie University, followed by a law degree at the University of New Brunswick.

Corey’s professional career took him from the law offices of McInnes Cooper where he was an articling student, to the federal government where he worked as a foreign service officer, working in Ottawa, Western Africa, India, and Vietnam.  Following the death of his stepfather, Corey returned home to Nova Scotia to be closer to family.  Upon his return to NS, Corey worked and volunteered for various housing and environmental organizations, including the Ecology Action Centre, the Out of the Cold Shelter, and Halifax Housing Help within HRM, and Juniper House, and SHYFT within Yarmouth Co.

Corey has also had several forays into the private sector, owning and operating a restaurant in Halifax NS, following the sale of which, he and his spouse moved back to Argyle riding, where they were both raised.  Since returning to the Argyle riding, Corey has worked for several organizations, including as the operations manager of a local fish processing plant, executive director of the local family resource centre, and executive director of a provincial french literacy organization.  Most recently, Corey and his spouse operated a small family restaurant in Tusket NS, which unfortunately closed permanently in summer 2020 in the midst of the COVID pandemic.

Corey is running as a candidate of conscience.  While there will be no campaign within the Argyle riding, Corey has put his name forward so that others within the riding who share his concern that our current climate emergency requires immediate, and drastic action to be taken by our leaders, will be able to vote for a party that reflects their values.  A party that governs for the people, and their future, and who can see more value in the beauty and wonder of Nova Scotia, than just the dollars and cents that can be made by extracting every resource from it as quickly as possible.  A party that believes the solutions of the 20th century which brought so much good to our rural communities aren’t appropriate for the 21st century, and who are willing to let evidence-based policy making help guide us to where we need to be, not only to make things better for ourselves, but also, to make our communities sustainable for the many generations that follow.